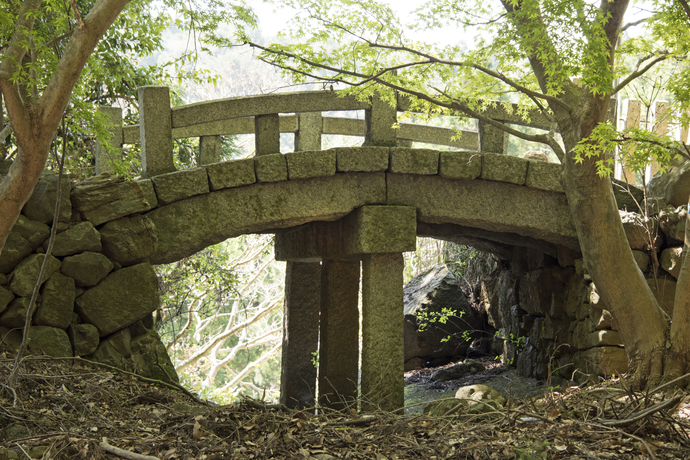 The bridge measures 3.75 meters long by 2.75 meters wide, and was built from granite stones. Abutments have been installed on the both ends of the bridge. It has three piers in the center with receiving girder stones (the stones on the upper part of the pier that receive the girder) on top of these to support the upper part of the structure. A three-sectioned girder stone passes vertically between the abutment and the receiving girder stones, on top of which stone bridge plates are laid. There are 24 bridge plates making up both sides, with the center of the bridge as the point of contact. The hand rails of the bridge were constructed using pillars at the front, back and center on both sides and combined with stones.

According to the chronological table of Kongosho-ji Temple, the bridge was built during the Keicho era (1596-1615) by Shimozato Nobutane (also known as Munekazu).

There is also a two meter-high stone monument on the east side of the bridge with the word “Trāh” (symbolizing Ākāśagarbha, Kongosho-ji Temple’s principal image of Buddha) engraved in Sanskrit characters. Below that, “Kuwana” (the name of the area), and the name of the man who built the bridge (Shimozato Munekazu), along with his wife’s name (Seigan Myoken), are engraved.

There are only a few stone bridges from this era in all of Japan, making it especially valuable.

March 2014 Ise City Board of Education