This ferry landing helped visitors from Kumano, located to the west, cross the Miya River to visit the shrine. The name comes from the fact that many willow trees (yanagi in Japanese) stood on the bank in Kawabata Town. It is also called “Kami no Watashi,” meaning “upper ferry landing,” because it is located upriver from the ferry landing Sakura no Watashi. Visitors to the shrine from the western part of Japan arrived here from Haibara in Nara Prefecture after crossing the mountains of Okuuda and passing through Misugi Town in Tsu City, Iinan Town in Matsusaka City, Taki Town, and Tamaki Town in Mie Prefecture. During the Edo period (1603-1868), no solidly constructed bridges spanned the Miya River, so for visitors to the shrine, this ferry was the only way to enter Yamada. Its role came to a conclusion with the opening of the Sangu Railway in 1897 and the construction of the Watarai Bridge in 1911, bringing an end to its history.

In the Edo period, twelve stone steps up an area of embankment at Nakajimaguchi ferry landing (Yanagi no Watashi) were used to gauge the water level of the Miya River.

At approx. 288 cm above the normal water level, the lowest step would be submerged, and at approx. 927 cm, the water would reach the 12th step. Yamada, the town in front of the torii gate leading into Geku (the Outer Shrine), has many low-lying areas, which were often damaged by floods, so it was important for the community to keep an eye on the water level of the Miya River during heavy rains and typhoons. 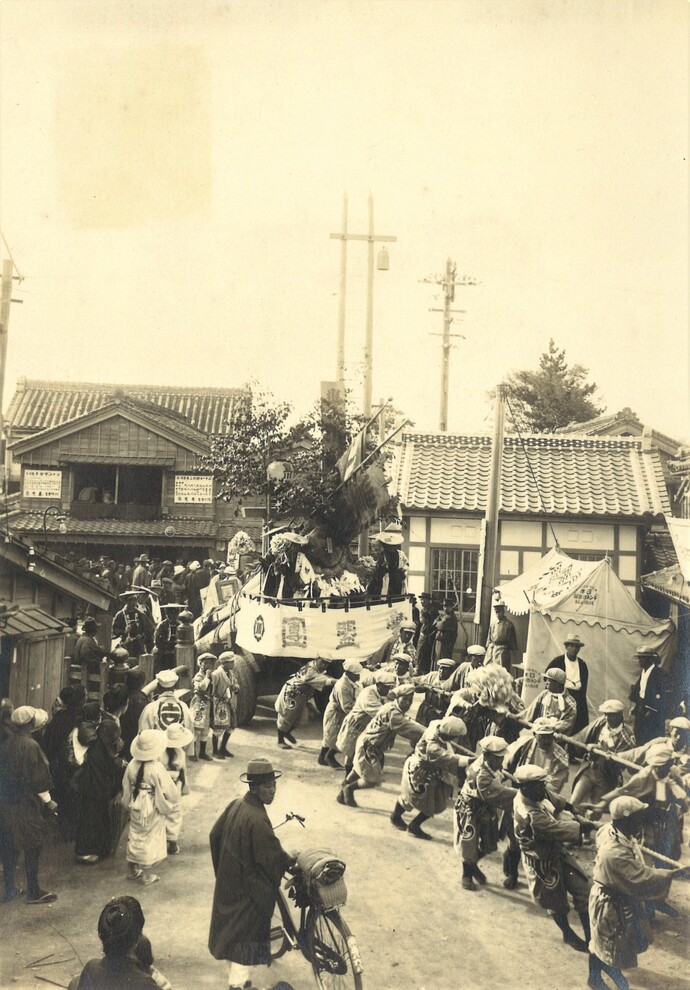 Since ancient times, a shrine renewal ceremony known as Shikinen Sengu has been held every 20 years at Naiku and Geku (the Inner and Outer Shrines, respectively) of the Ise Grand Shrine to rebuild the main shrine building and transfer a deity to the new shrine building with renewed sacred costumes and treasures. A festival called Okihiki is held a few years prior to Shikinen Sengu to carry lumber for the new buildings, along the Isuzu River to Naiku and overland from Miya to Geku.

It is thought that the original purpose of the festival was to load lumber, but the order of operations and methods of transportation were refined during the Keicho era (1596-1615), becoming similar to their modern forms.

The act of participating in Okihiki is called “hoei.” The wheeled carts for carrying the lumber are called “hoeisha,” and the groups from the city that pull them are called “hoeidan.” During the Okihiki for the 62nd Shikinen Sengu in 2006, 60 hoeidan groups participated in pulling lumber via the overland route, and 19 groups along the river. 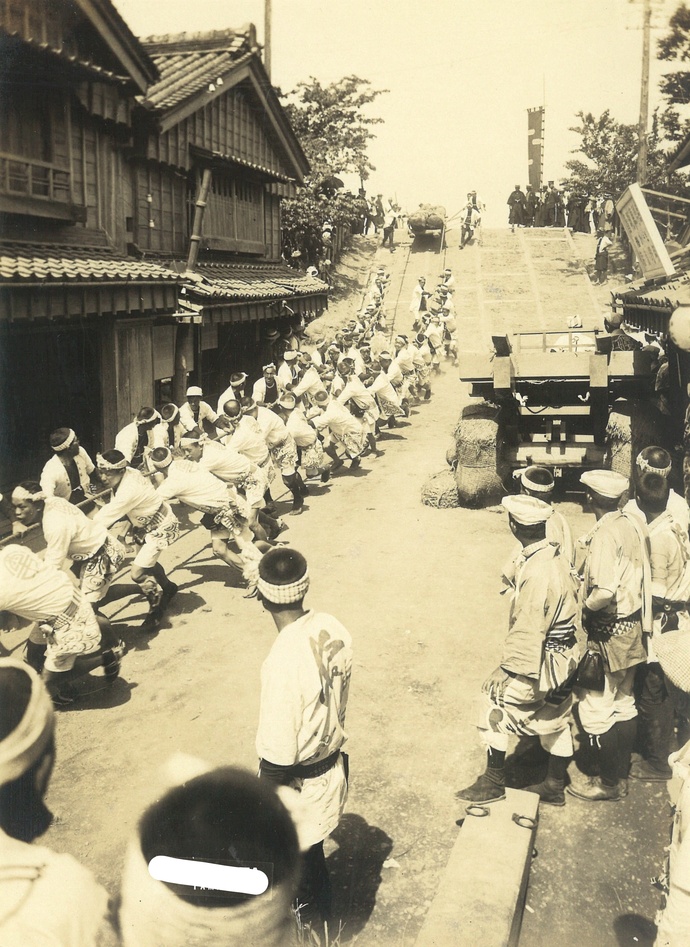 The area on the bank of the Miya River where the lumber are brought up from the Miya River is called Dondenba. Each group of pullers (hoeidan) receives a load of lumber from the storage area established on the bed of the Miya River. The lumber is placed on a sled and brought up to Dondenba along an earthen slope set up temporarily on the river bank so that it can be taken to the shrine. Ropes are attached to the front and back of the lumber, which is then swayed up and down, with one group on the side toward land and the other on the side of the river. It is said that the purpose of this is to dry the logs, and the name “Donden” is an onomatopoeia word expressing the way the logs look as they sway up and down. The lumber is not immediately pulled onto land here. Instead, this process of re-soaking it in the river and competitively tugging on it from both sides is repeated several times for as long as time permits. Finally, all at once, the lumber is pulled down the bank to the starting point in Nakajima. This is an important event that signals the start of the Okihiki.