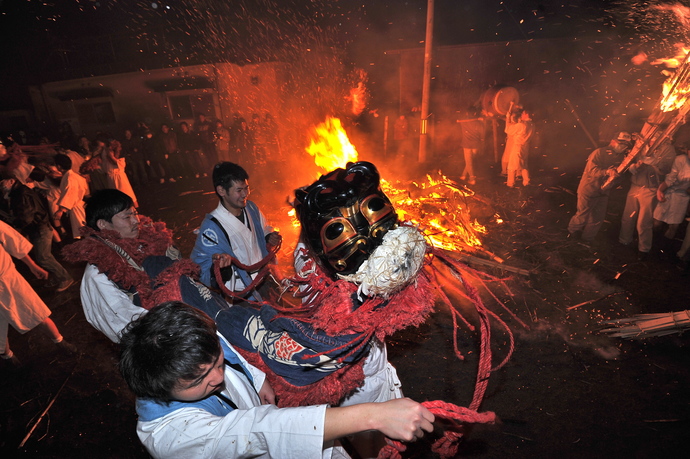 According to shrine records transcribed in 1664 during the Edo era by Shinto Priest Sasaki Jubee Takayuki, in the year 1038, a man named Mototaki Sadayuki carved two lion heads out of large willow trees from the raised footpaths between the rice-fields of Taimatsurida in northeast Takabuku, to offer to both the local guardian deities (at the main shrine and the kabura shrine).

During the Yowa Era (1181-1182) when bad weather and plague wreaked havoc throughout the land, a child prodigy named Kosugi (believed to be a tree spirit born from a sacred cedar tree in front of Usunono Shrine) who was raised at Shoho-ji Temple, which was built to a guardian deity, brought out a lion head from the temple’s depository for sacred objects. And leading elders, priests, and village officials, he used it to purify and bring peace to the area. The Okashira Shiinji ritual is believed to have originated from this. The current Fukumemono patrol, a ceremony to purify the area, is based on this legend, and Toya Seido (the system in charge of organizing the event) has passed down the traditional ancient ceremony unchanged all the way to the present day.

Ise City Board of Education