Along with the former Hayashizaki Bunko in Naiku (the Inner Shrine), this book depository is one of the most historically prominent library facilities in Japan. The facility was founded in 1648 through an initiative by a Geku Gonnegi (provisional suppliant priest for the Outer Shrine) named Deguchi Nobuyoshi in cooperation with others, including Yamada Sanpo (an autonomous local office). In 1661, the Yamada Bugyo (official representative of the shogunate in Ise) named Yagi “Tajima no Kami” Munenao received a contribution from the shogunate government in the form of “permanent repair funds.” After that, the facility developed as a place of study for those learning to become Shinto priests at Geku (the Outer Shrine), and lectures on Shinto scripture were held at a set time each month. The facility was further enriched through lectures given by a number of great scholars who visited, such as Oshio Heihachiro, as well as book donations.

The book depository was abolished in 1868, and the lecture hall was lost in a fire in 1878. However, the approximately 20,000 books and documents avoided disaster and were donated to Jingu in 1911.

The Oyanezakura cherry blossoms (municipally designated natural monuments) within the precincts of the shrine have been adding color to Ise City in the springtime for many years.

July 2015 Ise City Board of Education 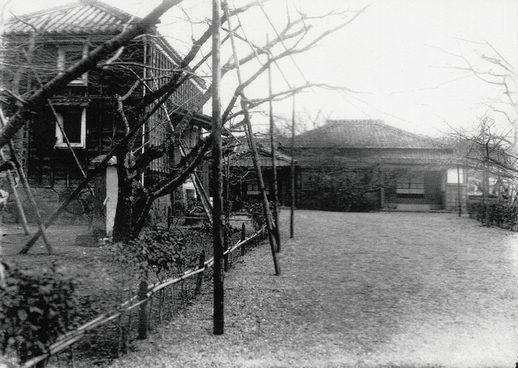 Inside the Former Toyomiyazaki Bunko
Front view: Daikansha. Left side: The book vault and the founding monument. 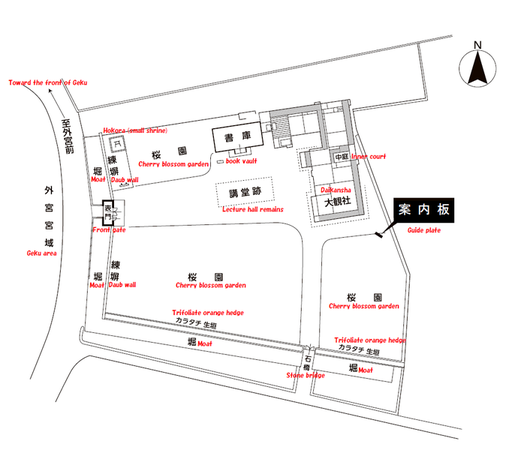 Ground plan for the Former Toyomiyazaki Bunko (Circa 1936)